We have read lots about frogs, and they apparently bask in the warmth of the day to keep themselves from hibernating, as they are cold blooded creatures. They disappear in the late afternoon and must go hunting for their meals then.
As you can see we are quite fasinated by them..and hope to get more tadpoes later from the Frog Farm where we got our current 'batch' of frogs last year - as tadpoles.

Teeny One, Our latest frog.....who is still a bit shy! 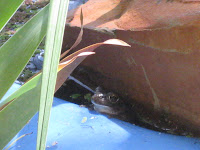 Here is Frogette also basking in the shade 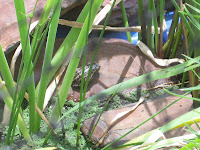 Below is Wee Bit basking in the shade in the middle of the pond...he is now the biggest. 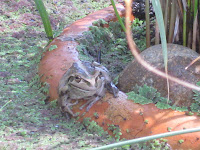 Some more on our frogs...yes we have more!

Froddo has escaped into the wild...but we catch up with him at times while 'frog hunting' when it gets dark.
We still have Wee bit, who has become a lot larger...though not as big as Froddo has become..and is not such a Wee Bit any more!

A while ago Frogette appeared...followed a couple of days ago by Teeny one, who is still very shy of us.
Posted by Joan at 11:42 PM