I did a small amount more...the straight lines on the left hand side above the feathers will be frogged soon as I am not happy with them...but they will keep a bit. 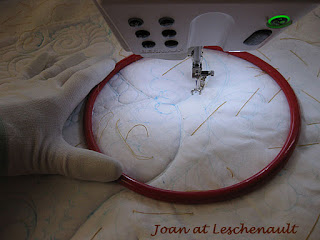 I tried some different things last night. I used this to see if I could manage...but the wieght was a bit much (the quilt was too heavy and I am not really happy with the fabric I am actually using) It would work well with practise I am sure.
I also tried the BSR on a practise piece, but I really manage better on my own.
Its PPP for me to get my stitches more even.
﻿
Posted by Joan at 8:28 PM 8 comments: 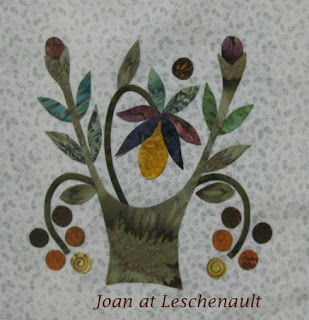 This photo took me a while as I put in the text in Photoshop ... took me a while to remember what to do :)
Not too keen on the colours - hope to make the next one brighter.
Andrea helped ...  I drew the small templates - and she cut them out for me!
What a wonderful help.
Now I have 5 more blocks prepped.﻿
I have decided to get the blocks all prepred and then sew them when they are alkl completed. That way I may get them done quicker.... hopefully
... and while I have the fabric mess - I may as well go with the flo
﻿
Posted by Joan at 7:15 AM 9 comments: 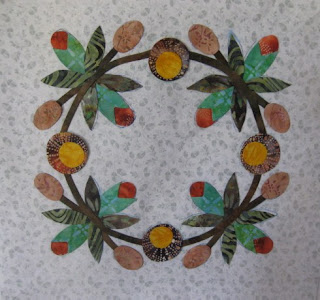 Will keep for a while - as we have some more issues with health here :(

I will get some more together before I sew them﻿ 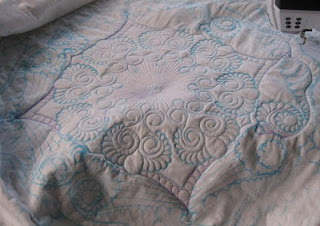 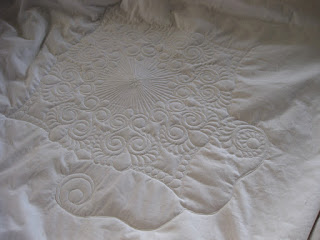 and back.
SO - I have done a small amount more.  Gradually getting the center done!
Slowly but surely!
﻿
Posted by Joan at 12:34 AM 13 comments:

I made the FNSI at last.
Spent some time frogging before I got there though - and had to almost relearn my machine.﻿ 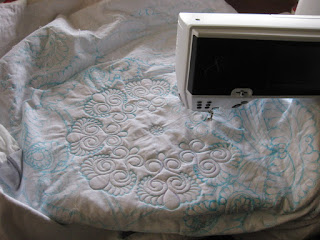 So here is what I have done so far on my WCQ.
Two and a half more of the center motifs to go and then I hope to do the centeral lines! 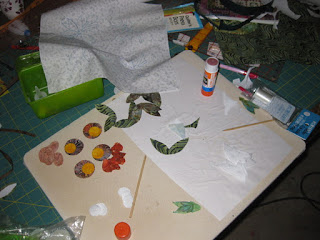 I was not happy with the way my 1st Hop To It block (#12) was coming along,  so have changed the backgroound fabric and am re-doing my small pieces.
I hope to get some applique done before and during the next FNSI.... or mabe the WCQ??
Or ..... shock horror ... both!!
Posted by Joan at 3:34 AM 7 comments:

Labels: WCQ and Hop to it BOM

The Adventures of 'Arbie'
Arbie was a stuffed toy of Andrea's mother... and much loved.
Andrea couldn't say Rabbit and the name evolved to Arbie once she first started speaking :)
So here is the story of Arbie - Mark 1. 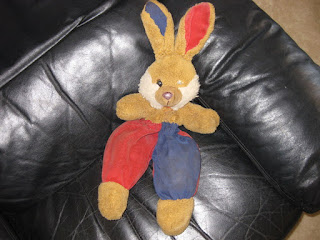 Andrea's mother died when she was a baby - so we gave Arbie to Andrea when she was about 8 months old.  He was her constant companion and went everywhere with her,  she wouldnt sleep without him! He was so very much loved!
As you can see by his photo - he is well worn.
He had some special adventures, especially when we went on our annual holidays to Rottnest Island - off the coast of Western Australia.  He was accidently dropped off our push bike and fell between the chain - got covered in grease and of course then was delicately washed!
He got lost on the road at Rottnest on the way home from a fishing adventure... my eldest DD, who was staying with us, rode off and found him in the middle of the road some way from the settlement (  quite an effort for her as she was 8 months pregnant at the time)  So he was brought home to us again.
Then he was just missing after a shopping adventure!!  and it was evening before we discovered this.  So for one dreadful night we went without him... it was very stressful!!
Next day we went to the police station on the island to tell the nice policeman we had lost our rabbit :)
No one had handed him in.
We went to all the shops in the settlement... then one of the kind ladies there told us there was a rabbit in the Rottnest Island Authority office...so off we went again - and there, sitting on the top of the counter, was Andrea's precious Arbie.  You can imagine how thankful we were to have him back with us.
As you may be able to see by his photo...he was very squashed especially around his waist - which is where is was held where ever Andrea went!
In time he had many other adventures...and was occasionally sicked on too.
Then he lost an eye!  Time to make a new one. 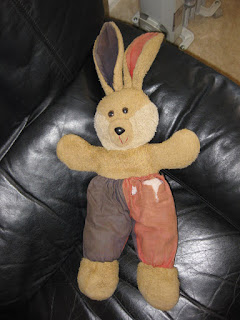 This is Arbie Mark 2!
I very carefully drafted a pattern from the original - and came up with this one.
As you can see he too is well worn!  And much loved!
Time for another Arbie - at least this one lasted from aged 3 to 15 :) 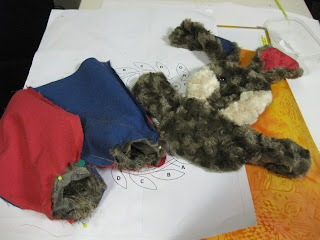 The making of Arbie 3. 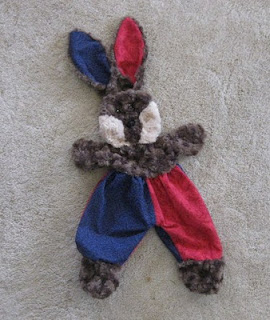 Sadly I couldnt find the right fur this time - and had almost forgotten how I made him!
Made his nose wrongly and his eyes are a bit crooked!
And I got the ear colours the wrong way round! 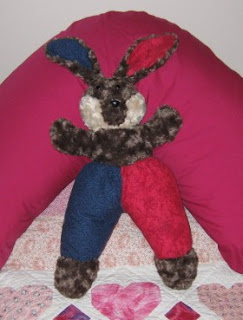 Here is Arbie Mark 3 - waiting for Andrea to love him again .
I was not too happy with this one... and will probably do another to make it smaller and softer...
with some fur I found that I had for the second one.
Here are the three together :) 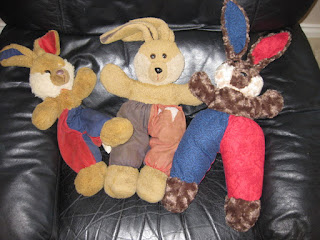 So I guess there is an Arbie Mark 4 around the corner... and maybe even another one for Andrea to give to her child when she is grown with a family of her own.
I am still struggling with getting things sewn!  I am doing lots of frogging...
Posted by Joan at 8:27 PM 7 comments:

I have made a start with this BOM - at last. 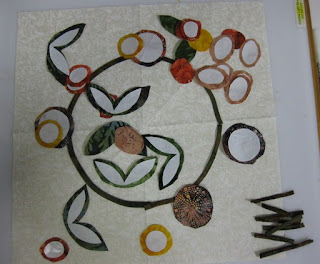 My First block in the Hop To It BOM - Block #12 -  with the pieces cut out.
Hoping to get some ot these pieces completed ready to set up the block and sew .tomorrow.
﻿
Posted by Joan at 8:34 AM 8 comments:

Pleased to say things are becoming good again!
I have come off my happy pills and have come back to life!!
Have been playing for the last week or so.
Here is my practise piece on the left  and the quilting beginning of my Whole Cloth Quilt.﻿ 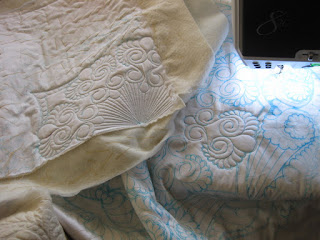 So that is what I will do first...the center, then it will be back to the practise piece, which is 1/4 of the WCQ,  and work out what section for the next bit - huge way to go - and I have already been frogging some.
I have a problem with one corner not being square - not quite sure what to do - maybe I will undo some of the basting and try sorting it a bit ...  still thinking on that one. 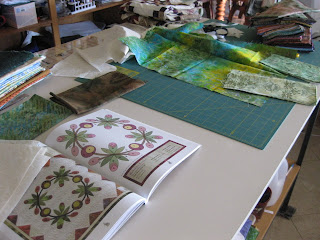 The beginning of my Hop To It BOM  that Joanne of Thread Head and Wendy of Inky Threads are doing - I am a long way behind.
I started off being very organised 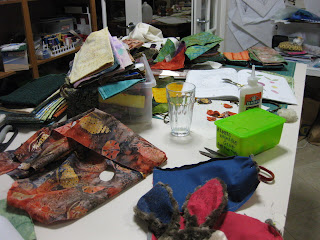 And then ... this is my studio cutting table tonight.
Wouldnt you think that picking fabrics would be easy :)
If you look closely in the foreground is what I have been making today .... more on that later
Posted by Joan at 8:07 AM 11 comments: