SewCalGal has another FMQ going for 2013...
So of course I watched the video, which was free for a short time only... a video on The Quilt show.. with guest Libby Lehman and have been working on a small sample to practise what i remembered. 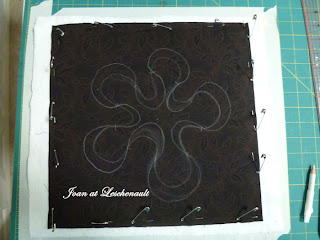 I didn't use the Freezer paper as Libby said to do, but drew my design on with chalk...in hindsight it was obviously better to use the freezer paper as it would have acted as a stabilizer.  Should always listen to the teacher :(
I actually remembered as I had it all pinned on - that I was meant to SEW the ribbon design on
BEFORE I sandwiched the layers...sigh - so it all came off... 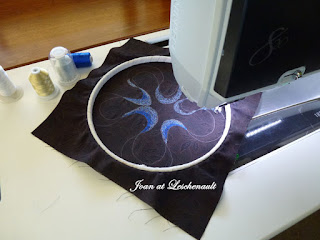 Libby also had a lot to say about threads and needles...and tension.  oh and using the BSR on a Bernina.
Libby Lehman,s video on the Quilt show can be found here

I did use the BSR - #1 for this,  for the first time,  but I am never comfortable with it. - I stuck to it this time though!
I have never scribbled before either...and don't think I did it large enough   When Libby did it, it looked like lace and .. she used some beautiful shimmery Superior thread. 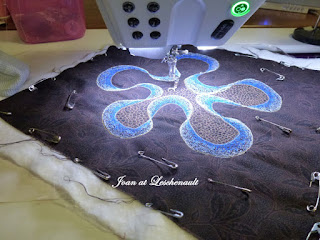 This is now partly quilted.  I did try to experiment with threads, but after a LOT of trials - I gave up on the metallic .. for now.
Not sure what the treads I used were exactly - but I did you special thread in the bobbin - I actually had ONE.  I used a very pale blue polyester for the outside highlight - a darker blue in the middle and a royal blue to.  I outlined it all in a polyester variegated yellow  shimmery thread.

I have a huge problem with my machine telling me that the tread was broken - repeatedly - and it was NOT.
Then I remembered Cindy Needham saying in her class that you have to think of the thread direction.  So I used a thread holder at the back of my machine...and I didn't have a problem after that.

I am using YLI silk thread -which I love -  for the small circles in the centre,  with a Bernina 70 needle as I kept trying new needles - all kinds and sizes... because of the "query ' thread alerts.
and I was toying with the idea of FMQ feathers around the ribbon using them as a spine, but that my not happen yet.
I am too tired to do more...  my eyes keep wandering,  and I have work tomorrow..and may not get back to this till late tomorrow evening...maybe!

Have a great day/night.. and I will catch up again soon.

More photos when I can take them in the daylight.
Posted by Joan at 7:42 AM

This is perfectly lovely Joan, I like the way the ribbon shimmers under the light of the machine. Haven't begun mine yet, but have watched the video. Never have had luck using a topstitch needle but may try that again when I have some Superior thread which is on the list to order one day soon.

That looks really cool!! And fun to do!

That looks lovely Joan. Congratulations on trying it already. I've watched the video but won't have time to try it yet. Hopefully you'll overcome the problems you're experiencing with thread and machine combinations

What a great ribbon/threadplay piece. Love it. Those blues and shading definitely draw me in and want more. I can imagine an entire quilt with this technique. Great job Joan.