Al the neighbours received a pone text to tell us of the fire and to prepare to evacuate, as there was some danger to life and homes   The fire was 6 kms from us, and there were 2 fixed wing yellow water bombers and two large water bombing helicopters flying through the dense smoke - flying really low above the trees,  as it was out of control for a while.  the highway near us was diverted for a while, and we just watched and tried to work out what we would do.
We were all notified on our mobiles of the danger and told what we should do if the fires remained out of control. 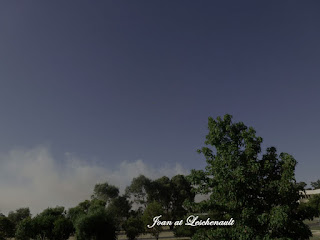 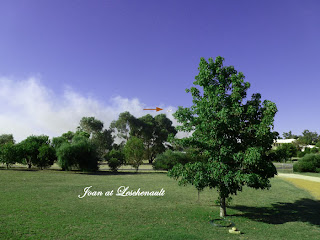 I did get some photos of about an hour after is began, and the smoke was really dense and black ...but my battery in the camera was low and it didn't work out

The situation now is that the fire is contained, but the fie fighters will patrol the area tonight,

A few people were evacuated along Marriott Road, and between there and  Treasure road ...and close to Dunn Road.  Cars were diverted from the highway for a while, and some roads  were closed and people were not allowed in.  There was an evacuation area ready at the Leschenault Leisure Centre... just in case.
Fortunately for us, it was just on the other sire of the highway, so all the neighbours gathered in our street to observe the fires.  There are planes still flying over at times - I guess they are keeping an eye on the fire, as there is still some bush in the centre of the containment that needs to be watched.

We are off to bed now.. with phones close just in case.

Its still really hot in the house.
Posted by Joan at 9:23 AM

that's scary, stay safe. I've come to learn more about fire than I ever really wanted to, my son works as a hot-shot, nuff said...fire is scary

Scary alright.. hopefully that is as close as it gets to you and that it remains under control, and well away from homes and people. Take care!!

Oh my, do hope your night proves to be quiet and the danger passes quickly! Hugs and stay safe!

I hope the fire can be put out quickly.

I hope you and yours are safe and sound, Joan!

Hugs to you and Andrea.