A quick play at home and a wonderfu gift that arrived. 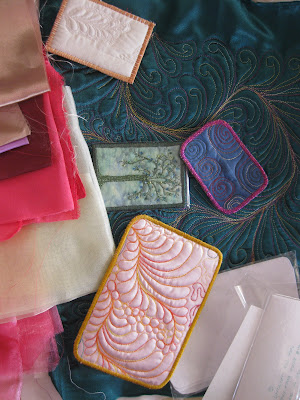 My present from Janet in England - one of the talented Free Motion Quilting 2012 participants
The small white trading card is mine - I was shown how to do them by a dear friend... and ths was a practise one....some lovley fabrics from Janet and the three cards and some of the curtain pelln...I think thats what is called ,,,and I was so delighted with this - thank you Janet so much. 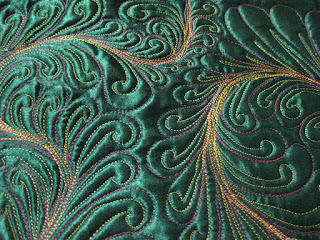 A play piece with this beautiful coloured fabric that wa in the bundle.. I drew the spines in and FMQ the rest.
and then today - this card arrived. 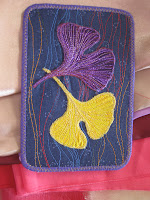 Its a beautiful card Janet  - I just love it.
Thank you Janet.  Surprisingly our fiends are from about a mile from where you live
Liz and Russ are Andrea's God-parents and Russ's father has immigrated to Australia and has lived where you are Janet untill the last 18 monts.
What a coincindence.
Thanks again.
Posted by Joan at 9:02 AM

What a lovely gift. You have made some lovely pieces yourself. Happy New Year!

Gorgeous pieces Joan and I love your header. Happy New Year from another Janet.

What beautiful FMQ cards. What fun.