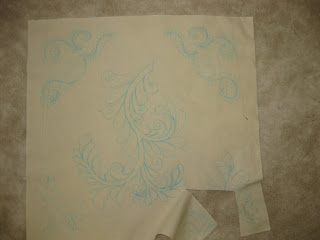 Today was a bit bad...as you can see - I sliced through this design - three of my own and two (the same) from Wendy, which was availabe for public use, at Ivory Springs... (through a magasine article of some of her work)...and I was looking forward to this one...so - I shall do it again on some different fabric -
Later...probably much later.
My studio has changed again, as I have a new counter...and so a different set-up which actually is working well... maybe a photo later.
It was tiday till I stared playing ,
Posted by Joan at 11:31 PM

Oh Joan!!! What a horrible thing to happen!! All that work you put into your designs too, I hope you have a hard copy of your designs and didn't just wing it on the fabric!!

Oh no, Joan!!! I really feel for you for I know how time-consuming it is to transfer a feather quilting design onto fabric. You think you can still use part of it, and just whack the snipped through part of?

Oh Joan..what a shame!
I hope your able to redo it..it will be lovely quilted..
Julia ♥