Some photos of the past weekend 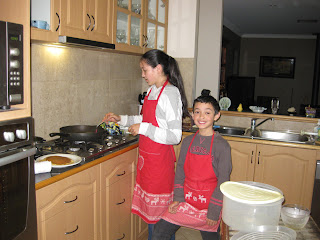 Andrea and her brother Patrick busy in the kitchen 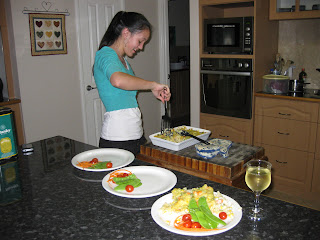 Andrea cooking Monday nights dinner...she did a great job!
The wine was mine - not hers :)
Good news and bad.
The good news is Mal at last has an answer to his pain problem...the bad news is - it is a benign tumor in his spine. The Doctor doesnt think its malignant as he would have been paralized by now...
but he needs an operation ASAP to prevent that happening,  so that is in the very near future.
As the tumour is growing - the pain is worse each day.
So ... sewing time is still a mystery to me as I still have my Nurses hat on ..but I am intending to try to get to the FNSI at least. 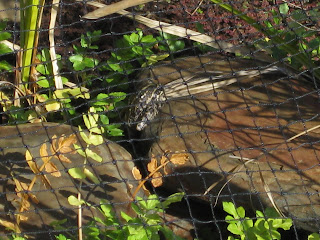 On a lighter note....
When Andrew was here over the weekend, we were telling him about our frog that spent any sunshine during the day sitting on the rocks...

So he named it Vodka - on the rocks :) :)
Vodka is very timid and jumps in the pond if he sees us coming.
Also doing an online QW couse , which is again time.
My apologies if I have not answered some comments...
Catch up again if I actually get something done :)﻿
﻿
Posted by Joan at 9:14 PM

It's great that you've had some news/results from your hospital visit - now you know what you are dealing with and a plan of action can be undertaken - and I can understand your concerns, as sometimes an 'named' enemy is just as terrifying as a unkown enemy - I hope all goes well and that M has a speedy recovery - don't worry sewing time will come in due course, but you might need a small hand sewing project for your hospital waiting times ;0)

I'm so happy that Mal finally knows what is going on and that it is fixable. He may be in a bit of pain after the surgery but it will be wonderful to know he will evenutally be pain free. Prayers going up for a quick recovery!!

Sorry to hear about the tumor, but at least you now know. You will be in my prayers and thoughts!

I need to have Andrea come and live with me. Such a sweet girl!!

It is great news that there is an explanation for Mal's pain. Hopefully he can get in for surgery quickly and on his way to a speedy recovery! Looking forward to spending some time with you and my other blogging buddies at the FNSI!

I'm so glad they've finally diagnosed the cause of Mal's pain. Hopefully, the surgery will bring him back to you pain free and well again.

Sorry Mal has been in so much pain..now, knowing what caused it, perhaps it can be taken care of, Best wishes for a speedy recovery.
Some hand sewimg may be what you need now.
Julia ♥

Lots of love Joan
Glad you finally have an answer to Mal's pain. Hope the operation is real soon
Still trying to get to see you.